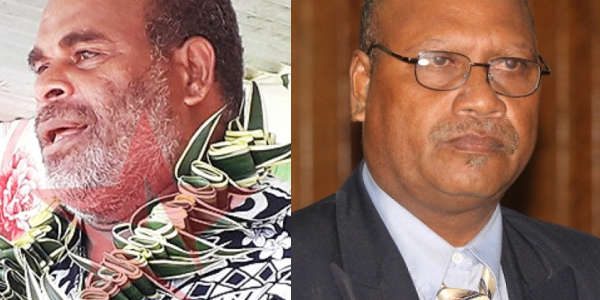 PREMIER Daniel Suidani and the Speaker of the Malaita Provincial Assembly Ronnie Butala are trading accusations of lying as the countdown starts on a no-confidence motion in the Premier next week.

Mr. Suidani told the national broadcaster, Solomon Islands Broadcasting Corporation [SIBC] on Tuesday night that he had communicated the details of the swearing-in ceremony to the Office of the Speaker on Monday.

“That’s a lie. My clerk and I were in my Office until 6pm on Monday night but we received no paperwork to do with the swearing-in from anyone including Premier Suidani.

“So the claim that the Premier had sent to my Office the paperwork is entirely false. There is no such a thing,” the Speaker said.

On Tuesday, the Premier allegedly sent a team of security men, including three policemen who tried unsuccessfully to get the Speaker of the MV Tahimareho, which was traveling to Honiara from Auki.

According to the Speaker the men boarded the MV Tahimareho near Ngella on Tuesday, and informed him that they were carrying out an order by Premier Suidani through the Malaita Provincial Commander to take

“In fact if the Premier was serious about his ministers taking the oath, he would have accepted the fact that his office is responsible for organising the ceremony in go time.

“Unfortunately, that was not what happened on Tuesday. He simply left it until it was too late to do anything. That, I must add, characterises the way the man does things,” the Speaker said.

The other factor is the fact that there is already a no confidence motion filed against him and the motion is sitting before the Assembly. The Premier knows that.

“Swearing in new ministers will not make any difference if these individuals had already made up their minds about jumping ship. What the Premier did is a sign of a man desperate to hang on to power, no matter what,” the Speaker said.

In Auki yesterday, Premier Suidani accused the Speaker of being “too quick to facilitate moves against the MARA government, but reluctant to follow orders from him.”

Premier Suidani also accused the Speaker of working against him.

“A classic example of the Speaker’s working against the MARA government is the incident this week where he was quick to put up a notice of motion of no confidence against Premier Suidani then escaped to Honiara to avoid the swearing in of new MARA government ministers.”

But the Premier was vague on when he had communicated the information for the swearing in ceremony, except to say he did so through the Provincial Clerk Mathew Maefai who allegedly communicated it to the Speaker.

The Premier said it is no secret that Mr. Butala has been working together with the mover of the motion and DCGA to try to topple the MARA government.

Meanwhile, the Office of the Provincial Clerk insisted the information from the Premier was communicated to the Speaker.

“However, the Speaker refused to obey it by stating the swearing in of new ministers should be done after not before a motion of no confidence.”