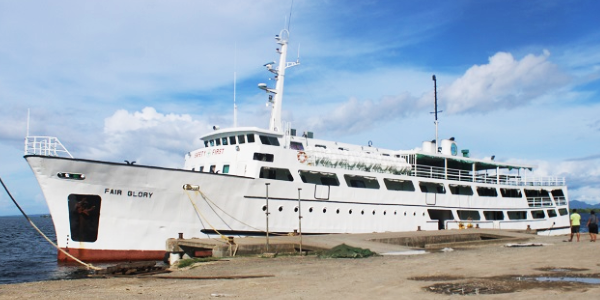 WESTERN Province has temporarily banned all passenger vessels traveling from Honiara into the province as of this week due to increasing COVID-19 cases in Honiara.

According to the Chairman of the PHEOC in a circulated email, that the reason to postpone all travel is due to the increased COVID-19 cases in the capital city.

There were 1,105 cases reported within 13 days in Honiara.

Dr Michael Buin said apart from surging cases, the limited frontline workers to do swabbing at the various ports is another factor.

“Another reason is Gizo Hospital swab team members are currently being investigated after a member of the team tested positive.”

He said the Seghe area health centre staff are also incapable of doing clearance and follow up.

He said there were experiences with people testing positive a day after travelling into Gizo via plane after a single RAT test. Therefore, it’s important to impose the ban, it was highlighted.

Those traveling via air are still allowed.

“Due to financial issues drug orders have not been sent. Even Panadol stock is low,” he said.

Dr Buin said from past experiences those who arrived from Honiara and supposed to remain on home quarantine just roam the town and villages and not adhering to advice.

The PHEOC chair said currently there is also a lack of government institutional quarantine sites to cater for passengers at the port of calls.

“The provincial health authority is faced with a difficulty to follow up on passengers after 5-7 days of home quarantine,” he said.

With the increase spread in light of the second wave of infection there is much higher risk for communities in the province.

He said Marovo has an overall coverage of only 39% (39% of those over 18 have got two or more Covid vaccinations).

“But in certain villages it is less than 10% to 0%. Given the fact that 18 of the deaths which our health team have attended to (Dead Body Management) all were unvaccinated.

“It is in the interest of the Marovo population that passenger vessels be postponed for now.
“This is the stand of PHECO,” Dr. Buin said.

Meanwhile, passengers including teachers from Western Province that are planning to return this week will have to remain for now.

Some of the teachers are now worried following the latest travel advisory.

Last week the Ministry of Education appealed to all teachers to return to their schools before the Education Expert assessment will be conducted.