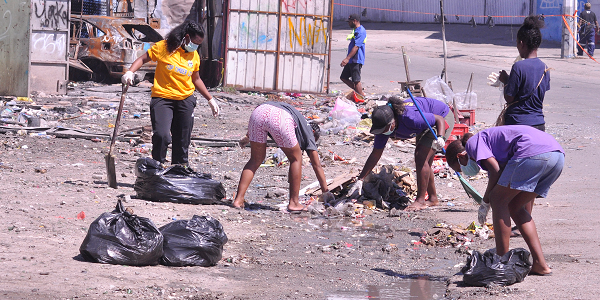 AS volunteers flooded in to do clean up at Chinatown, Kukum area and Ranadi the Haura Womens Football Club FC also participated in the clean up exercise.

Haura FC team join group of volunteers at China to do general cleaning up on Sunday.

About five team members volunteered their time to clean up the mess left behind by rioters and looters.

On Wednesday a peaceful protest was staged in Honiara which turned into violent.

The protesters blamed police for using tear gas while they were doing the protest peacefully.

However, police clarified that the protesters have not behaved well during the protest so they have to react.

When the protesters were shot by tear gas they turned violent and went to burn down the leaf hut close to the National Parliament.

It was reported that opportunists have taken advantage of the lawlessness and started to loot and burnt down shops, school, bank, police station and hardware.