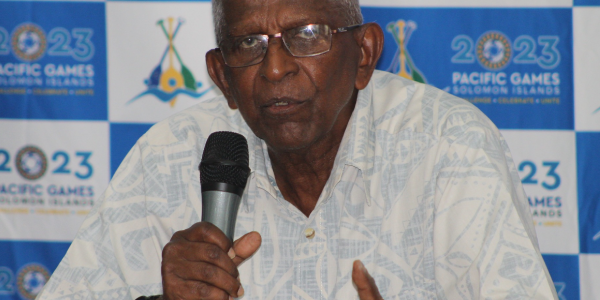 THE Pacific Games Council says Media in the Solomon Islands plays an important role in delivering a successful Pacific Games next year.

This was revealed by the PGC president Vidhya Lakhan last week.

He said whilst the PGC appreciates the progress of preparation towards the Pacific Games, the Media has a very important role to play in supporting these preparations.

“All I ask of you is that we want positive and helpful reporting.

“I want you to help us through your messages, through your media to get the Solomon Islands people on board, helping and supporting the people and athletes to reach that extra mile we need for them to achieve their goals, so that you all can say it was a very successful Games.

“I know you want to report things that you see, but if there are negatives, if I can request that you discuss those issues, I’m not saying that you don’t report them, you do but get the facts right before you start writing about them.

“You can help us (PGC) to make sure that you have the whole population behind the Government, behind the GOC and authorities who are responsible in delivering the Games,” President Lakhan said.

He highlighted that the Pacific Games is the largest single event to be ever hosted by the Solomon Islands but to make it a success, the media, responsible authorities and the people of Solomon Islands all have a part to play.

“To make it a success we all have a part to play.

“We must join hands, become one team and help us to deliver a successful Games,” he added.