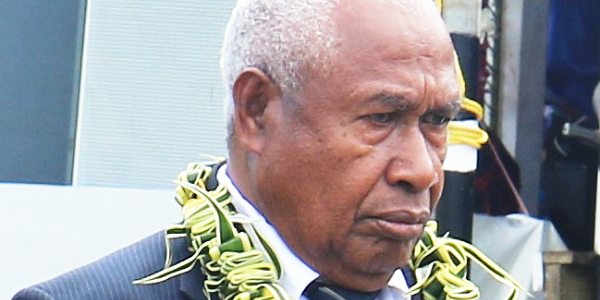 THE Makira Provincial Government, Chiefs, Traditional Leaders and Elders fully supported the enactment of the Traditional Governance Custom Facilitation Bill 2018 (TGCFB), this was echoed in a consultation held at Kirakira, Makira/Ulava Province from 27-28 July 2021.

Speaking at the consultation, the Makira Ulawa Provincial Premier, Julian Maka’a had acknowledged the National Government for its continual pursuance of the withdrawn TGCFB Bill 2018.

“The Bill is very important and timely. As the Premier for the province I am really happy for the National Government through the Ministry of Traditional Governance Peace and Ecclesiastical Affairs (MTGPEA) for taking the Bill back to the people for more consultation after it was withdrawn in 2018” He says.

The importance and timeliness of this Bill is because it seeks to support, recognize and empower the roles of Chiefs and Traditional leaders comes to resource management and socio-economic development on the customary-owned lands including providing a platform that will enable Chiefs and Traditional leaders to have meaningful dialogue with the government and institutions.

“We value this consultation, therefore on behalf of the government and people of Makira Ulawa Province we thanked the National Government for the national consultation” he says.

He said some of the issues discussed during the cause of this consultation is real, therefore it is very important for us to work together to address this issues.

Representing the Chiefs of Makira Ulawa province, Chief Gad also thanked the Government for bringing the Bill to the Chiefs, Traditional Leaders and people Makira/Ulava Province.

He added “This Bill is very vital for us chiefs because it recognizes, support and empower us Chiefs and Traditional leaders in our leadership and dialogue role including strengthening peace and harmony in their communities”.

Chief Gad says “We are honoured to be given a chance once again to contribute to the draft Bill. He urged the government to enact the bill because it is the only way forward for future development.

Finally, he thanked the DCGA government through the MTGPEA for its commitment for continue pursue the bill.

“Your participation in the consultation is very important, given this Bill is to recognize, support and empower Chiefs, Traditional leaders and Elders, therefore your contribution are very much appreciated”. He says.

He highlighted that the Ministry in year 2018 has done a nationwide consultation on the draft Bill and it was withdrawn on the floor of Parliament based on the Bills and Legislation Committee (BLC) recommendations.

Therefore, the purpose of our coming is to consult with you on the draft TGCFB 2018 as well, to identify areas as recommended by BLC to support the re-drafting of the Bill.

He said with the DCGA government commitment to recognize, support and empower Chiefs and Traditional leaders, the team is here to further consult with you on the draft Bill for your inputs.

Hammock Beach purchase ‘not approved’ by CEMA Board
August 17, 2022
Go to Top